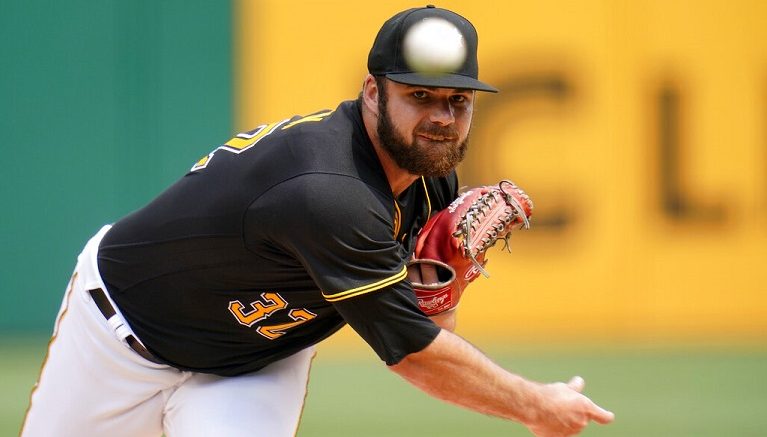 Pittsburgh Pirates starting pitcher Bryse Wilson delivers during the first inning of a baseball game against the Milwaukee Brewers in Pittsburgh on Saturday, July 2, 2022. (AP)

PITTSBURGH (AP) — Oneil Cruz collected his 12th RBI in 13 games this season to help Pittsburgh Pirates bounce back from a blowout loss with a 7-4 win over the Milwaukee Brewers on Saturday night.

The 23-year-old prospect put the Pirates up 4-1 with two outs in the fourth on a 392-foot solo blast to right with a 112.3 mph exit velocity that chased Brewers starter Aaron Ashby. Cruz has at least one RBI in eight games since being recalled from Triple-A Indianapolis on June 20, and at least one in each of his first nine games at PNC Park.

“The homer, when he hit it, my first thought was, ‘I hope a fan gets out of the way because this ball is coming in hot,” Pittsburgh manager Derek Shelton said of Cruz’s third homer of the year. “It’s right at our vantage point right there, so I was just hoping somebody got out of the way.”

Cruz also used his glove to help Pirates right-hander Bryse Wilson (1-4) pick up his first win since Sept. 18, 2021. The shortstop stretched every bit of his 6-foot-7 frame to snag a line drive from Christian Yelich with two men in scoring position before trotting to third, finishing a double play to end the second inning.

Wilson (1-4) was called up from Triple-A Indianapolis to make the start, and allowed two runs on eight hits with four strikeouts over six innings.

“It’s a great feeling,” Wilson said. “It’s kind of like a breath of fresh air. Weight being taken off my shoulders. I knew it was there, it was just finding out how to get it, how to use my stuff and execute the way I did.”

Pittsburgh has taken two of three in the four-game set, despite losing 19-2 on Friday.

“I think it says a lot about the character we have in here,” said Pirates first baseman Michael Chavis, who hit his ninth homer of the season. “We’ve got a lot of guys that like to have fun. We have fun when we’re on the ballfield. I think these guys like to get after it. These guys work hard.”

Pirates closer David Bednar pitched the ninth for his 12th save, giving up one walk with one strikeout after surrendering six runs his previous 4 1/3 innings.

Ashby (1-6) allowed four runs on five hits with six strikeouts and one walk in his return from the 15-day injured list with left forearm inflammation.

“There wasn’t a lot of hard contact,” Brewers manager Craig Counsell said. “There are probably three balls hit hard and we got a double play on one, and two balls out of the park. That means runs. … (Wilson) came out healthy, so we’ll move forward.”

Yelich sent a sinker from Wilson 416 feet over the Clemente Wall in right, his eighth home run, to cut it to 4-2 in the fifth.

A two-out, two-run single from Daniel Vogelbach followed by an RBI double from Diego Castillo into the left-centerfield notch extended Pittsburgh’s lead to 7-2 in the bottom half.

Kolten Wong later hit his sixth home run of the year to make it 7-3, and a double down the right-field line from Jace Peterson cut the Brewers’ deficit to three later in the inning.

Pirates: LHP Aaron Fletcher was optioned to Indianapolis with Wilson being recalled. … LHP Anthony Banda was traded to the Toronto Blue Jays for cash considerations. He was designated for assignment on June 27.

Brewers OF Hunter Renfroe (calf) is eligible to come off the 10-day injured list Sunday, but is not expected to be available.

RHP Zach Thompson (3-5, 4.47 ERA) will take the mound for the Pirates in the series finale opposite Brewers RHP Brandon Woodruff (6-3, 4.44). Thompson (forearm) will be activated from the injured list after last pitching June 17. Woodruff has won three of his past four starts, giving up five earned runs in 20 innings.